Anubis analyzes thousands of bad emails. And we see everything: from carefully disguised scams where a boss convinces the recipient to do an urgent wire transfer, to hidden URLs in an apparently regular attachment that will trigger a malware installation on your device.

Among these examples, there's the extortion email. A type of Ransomware that does not use malware but, instead, relies on the recipient's public (sort-of) information (credentials) that will supposedly lead to information to be made public if a ransom is not paid.

As of the last days, we've noticed one huge campaign of this type of email. Here are two examples: 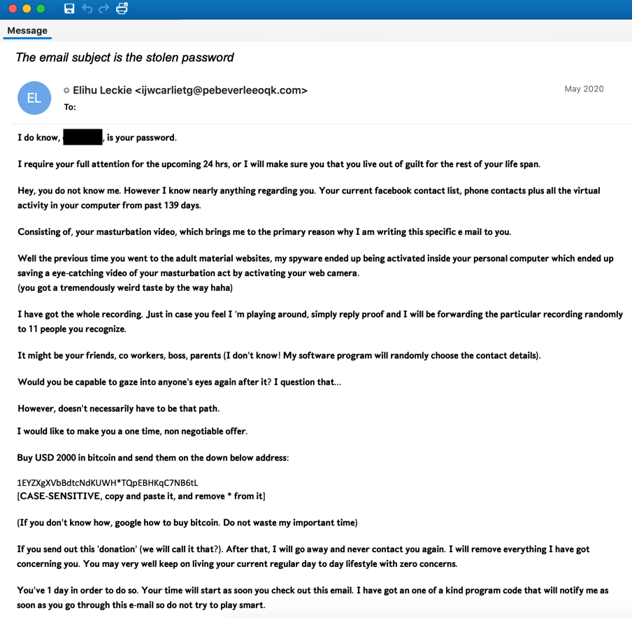 The important piece of this extortion is that the attacker knows the email address, and a real password. And uses this real information to build similar looking emails (a few variations), distributed massively.

Considering that Email Security Protection (such as Anubis') hunts these type of emails, the attackers came up with a few interesting aspects to ensure these emails reach the destination:

The good news is that this campaign will be short lived. It has been spotted (for instance here), and systems are now in place to avoid the delivery of the emails. The bad news is that we should expect other variations, also trying to extort people based on the huge amount of data breaches and consequent credentials available on the internet!

Are you safe? Should you pay?

First of all, the number one rule for Cyber Ransomware is Don't pay. Not only the chances of success are very low (and the attacker will still have your data to come back again), but as a society, if we increase the attackers' return , we'll increase their appetite for more (in volume, and in sophistication) ransomware attacks.

Secondly,  and for this particularly case:

This means, basically, that the recipients that got this extortion email, must make sure there is no website or application left that (still) uses the credentials displayed on the extortion emails. And re-think, if needed, how they manage their passwords, to avoid future extortionists!

It's always the passwords

It's important to set your ruleset for your credentials online. You should take a look at our older post for more about password management, but basically: