AnubisNetworks has participated in another major botnet takedown operation led by Europol’s European Cybercrime Centre (EC3). The operation involved investigators from around the world and sought to dismantle the Ramnit botnet that infected 3.2 million computers internationally. 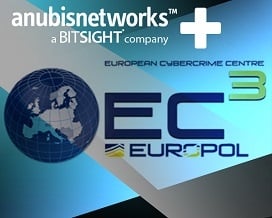 Europol officials worked directly with AnubisNetworks, Microsoft, and Symantec to shut down command and control servers used by the Ramnit botnet. The AnubisNetworks Cyberfeed provided EC3 and government officials with a holistic approach to threat intelligence by focusing on mapping malware campaign, method, and propagation vectors. This operation leveraged the Cyberfeed to:

“This successful operation shows the importance of international law enforcement working together with private industry in the fight against the global threat of cybercrime,” said Wil van Gemert, Deputy Director Operations for Europol. "We will continue our efforts in taking down botnets and disrupting the core infrastructures used by criminals to conduct a variety of cybercrimes. Together with the EU Member States and partners around the globe, our aim is to protect people around the world against cybercriminal activity."

“The takedown of the Ramnit malicious botnet illustrates a great victory for public and private sector collaboration against cybercrime,” said Francisco Fonseca, CEO and co-founder of AnubisNetworks. “We’re pleased to see Cyberfeed used as an integral, data-driven resource in this operation, and we’re proud to participate in this meaningful work. By providing real-time data on cyberattacks, AnubisNetworks can continue to partner with EC3 to mitigate future risks as they arise.”

Find me on:
LinkedIn
Return to News Index

Subscribe to Email Updates
Get instant notifications of the latest news